Flying Lizard Audi Wins NASA 25 Hours of Thunderhill presented by Hawk Performance
Ryno Ginetta second
WILLOWS, Calif., (Dec. 4, 2016) - The 14th edition of the NASA 25 Hours of Thunderhill presented by Hawk Performance has been won for the second year in a row by the No. 45 Flying Lizard Audi R8.
In a dramatic late race twist the dominate No. 57 Ginetta of Ryno Racing came to the pits with a right rear suspension problem at 9:15 a.m. (21+ hours into the race of which it led to that point). The No. 45 Audi R8, run by the Flying Lizard team, lurked in the top three all race just waiting for the 57 to have a problem. It was time for the defending race champions to take the overall lead. Darren Law was behind the wheel of the 45 when he took the lead with three hours remaining. It was not clear sailing from that point. NASA officials parked the 45 for 15-minutes at 10:20 a.m. for on track contact. The deficit to the second place 57 Ginetta was just six laps at the checkered flag. 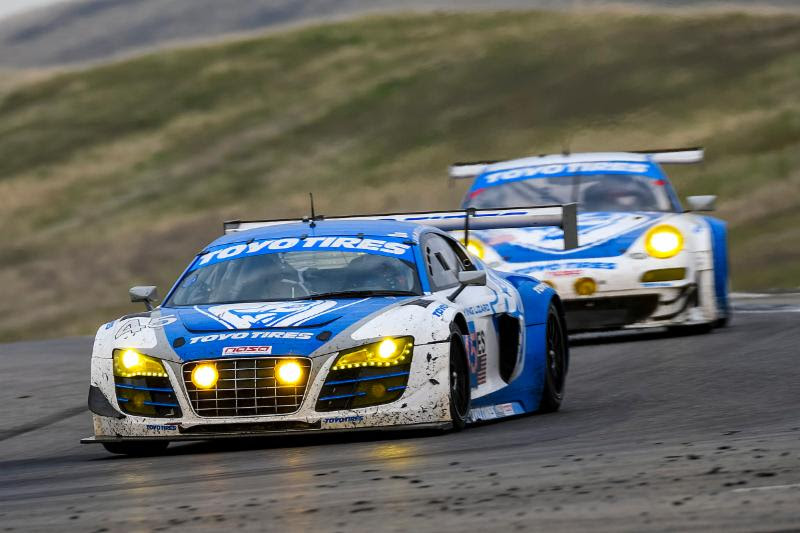 The 45 Audi R8 with Toyo Tires was driven by Darren Law, Mike Hedlund, Johannes van Overbeek and Dion von Moltke and covered 751 laps, approximately 2,103-miles.
"Two in a row," exclaimed Darren Law. "We had some adversity this weekend. I didn't think we would have gotten the prototype, but they had problems this morning and it worked out. We had that late penalty this morning. We had enough of a lead that it really didn't matter, but it was an anxious moment. The car ran flawlessly, the Toyo Tires were great and the crew was right on all day. Everything came together. It was also nice to bookend the overall podium with our No. 74 Porsche coming in third place. Unbelievable!"
The No. 57 Ryno Racing Ginetta was able to hold on and take second overall and first in the ESR 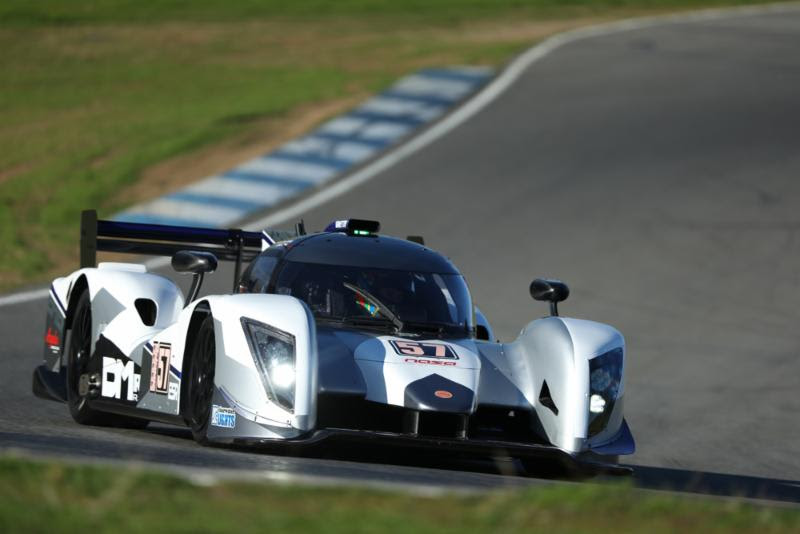 Class. The 57 was driven by Ryan Carpenter, Colin Braun, Parker Chase, Bryan Herta and Colton Herta. The team covered 745 laps.
"It's a great day for us," Braun said. "The Ryno Racing guys did great all day. We had a stub axle break on the right rear of both cars this morning. Other than that we ran flawless for the whole race, just tires, gas, oil and a fresh driver. All of the drivers did a great job staying out of trouble. That is the cruelness of this sport. You have to have all of the pieces together. We just didn't have everything locked down. Both parts broke within 20-minutes of each other. We showed we had a superfast car. The Ginetta guys build a solid car. We showed it can go 25 hours of grueling racing. An impressive testament to the team and the car maker."
The E0 Class was won by the pole sitting No. 11 Nissan 350Z of Valkyrie Autosport. The car was 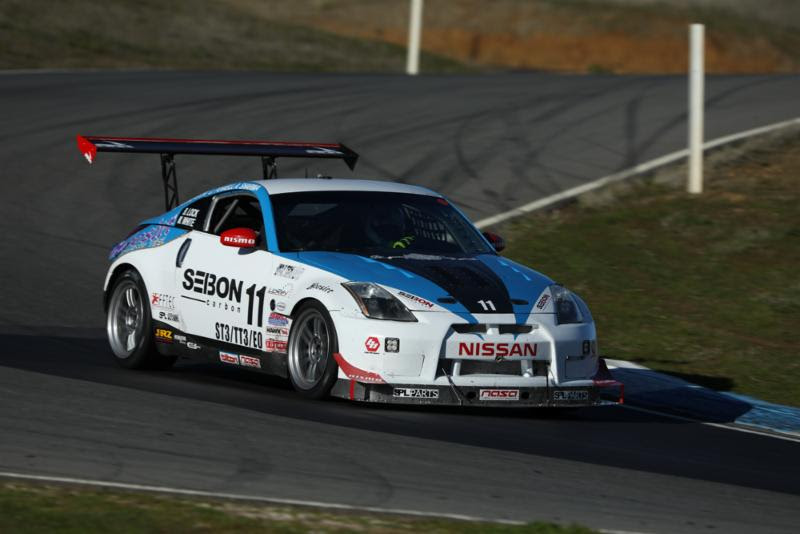 driven by Andy Lee, Brian Lock, Anan Sharma and Giles Powell and covered 677 laps.
"It went basically according to plan, except for one thing," Brian Lock said. "We busted a seal in the steering rack around midnight. After leading pretty solidly for the first half of the race the doubts started to creep in. Was the part going to hold out? We were waiting for a catastrophic failure, but it never happened. We must have pumped 10-quarts of oil through that thing. The 350Z is bullet-proof. For our first 25 hour win we are just ecstatic."
In E1 it was the No. 95 BMW of Grip Racing that pulled off the win over the No. 46 BMW of Art 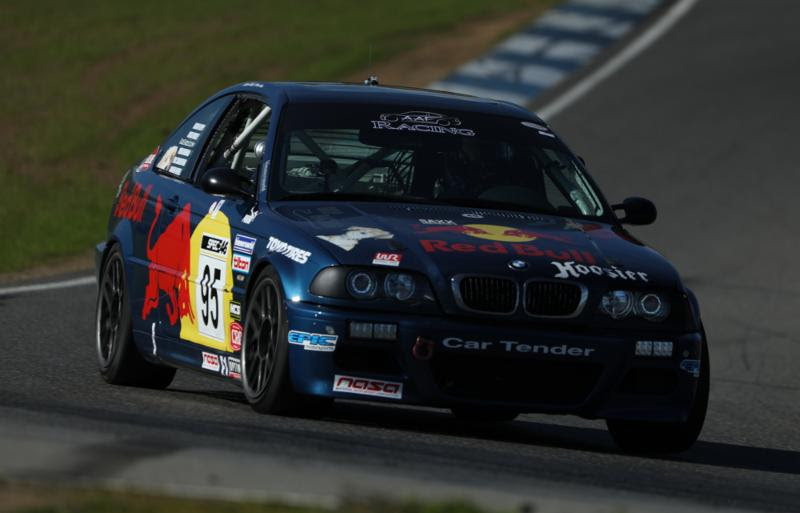 Racing that finished on the same lap. Drivers Mason Filippi, Chuck Hurley, Mark Drennan, Eric Sidebotham and Andrew Newell covered 677 laps.
"It is awesome," Andrew Newell said. "This is my eighth year running the 25. I have placed before, but this is my first win. Everyone seemed to race me really clean. At the end it came down to us and the No. 46 car. We both had to pit with 10-minutes remaining for a splash and go. We were running out of gas with two laps to go, but brought it home. The car ran like a top all race."
The No. 29 BMW of KD Motorsports came home as the E2 Class winner covering 645 laps. The 29

was driven by Matt Lowell, Corey Peters and Kevin Doyle.
"Nothing went wrong, just flawless," Kevin Doyle said. "The car held together. All three drivers ran clean the entire 25 hours. Our biggest issue was we had to change front brake pads. We planned for it and we made a nice clean stop to     change the pads and other than gas and oil that was it."
The No. 38 Mazda Miata of RA Motorsports won the E3 Class for the second year in a row covering 604 laps. The Miata was driven by Ron Gaymon, Ray

Meister, Duke Zander and Todd Tagget.
"It's amazing," Ray Meister said.  "It was totally unexpected. If you stay on the track and the car holds up it will work out. We really didn't expect to win. With this car we had no real drama all race. That was our secret. Our 40 team had some drama, but we ran a nice clean race with no mechanical issues."
In the ENP Class the No. 71 Diamond Level Motorsports NASA elan NP01 Prototype powered by Mazda won the class and was sixth overall covering 701 laps. The prototype was driven by Jeremy Croiset, Thomas Woods, Aaron Meyer, Jason Ricker 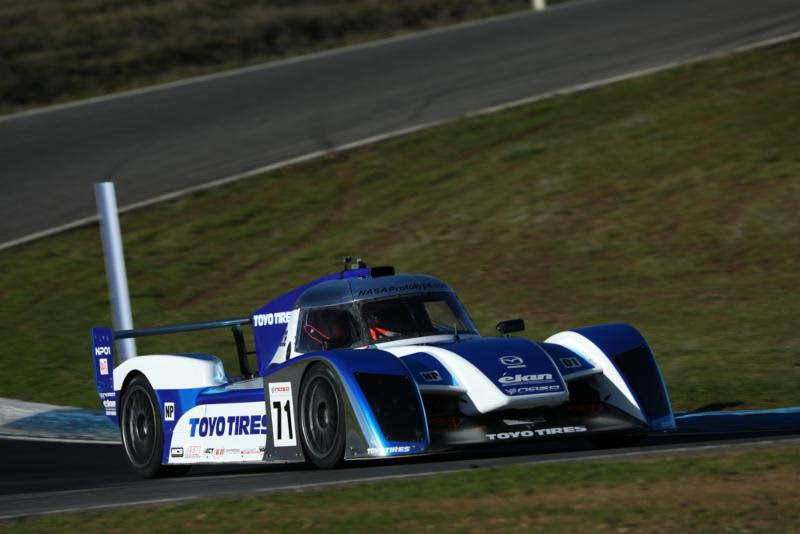 and Jaime Florence.
"Wow," Jeremy Croiset said. "I am almost speechless. The NASA elan Prototype NP01 powered by Mazda ran flawlessly. For me personally this is a total vindication of the program. I knew this car was capable of what we achieved today. We had zero mechanical issues. Not a single complication the entire 25 hours. If that isn't a seal of approval on the NASA prototype project I don't what is. We finished the most grueling race in the world without a single mechanical flaw. A huge thanks to Toyo Tires, Vet Sports, Bylight, Fisher House and of course Diamond Level Motorsports who prepared the car. It was an amazing effort. A massive thanks to everyone at Elan Motorsports."
Professional drivers listed on the entry include: Bryan Herta, Colton Herta, Ryan Eversley, Al Unser Jr., Sean Rayhall, Dion von Moltke, Colin Braun, Johannes van Overbeek, Darren Law, Tommy Sadler, Darren Law, Tyler McQuarrie, Kelly Collins and Taz Harvey with more expected.
Final results can be viewed at: http://timingscoring.drivenasa.com/NASA_California-Northern_Region/2016%2025%20Hours%20of%20Thunderhill/25%20Hrs%20Final%20Results.pdf
More information can be found on the NASA 25 Hours of Thunderhill website, http://nasa25hour.com/.
Media guide can be found at https://nasa25hour.com/wp-content/uploads/2016/11/Thunderhill-Media-Guide-2016.pdf
Teams, cars and classes, https://nasa25hour.com/2016-teams-cars-and-classes/
Driver line-up, https://nasa25hour.com/2016-driver-line-up/
For additional information, please contact NASA Championships Media Director, Kyle Chura at kyle@kcapr.com or (248) 821-0468.  More detail can be found at nasaproracing.com or nasachampionships.com.